When Erika Hubatschek received the State of Tyrol honorary award for her contribution to local culture, the laudatory speech spoke of “the Hubatschek cultural heritage.” She was described as an outstanding photographer (Tiroler Kulturberichte, April 1996) and compared to Peter Paul Atzwanger and Erna Lendvai-Dircksen. The Director of the North Carolina Museum of History wrote “I thank you for your steady pursuit of cultural documentation of Alpine farmlife!” And the Leica Gallery in New York put on an exhibition of Alpine Human Photography – a genre hitherto unknown.

Dr. Erika Hubatschek was born in Klagenfurt and grew up in Upper Styria. She studied geography, anthropology and sports in Graz and Innsbruck. In 1940 she completed her doctorate with her anthropological-socio-geographical thesis “Almen und Bergmähder im Oberen Lungau” (High pastures and mountain meadows in Upper Lungau”, supervised by Professors H. Kinzl and H. Wopfner. From 1940 to 1978 she was a secondary school teacher in Innsbruck.

From 1940 on she was passionately interested in the mountain farmers and their lives and work. She was a tough practitioner as well as a theoretician, and joined in the daily work in the numerous alpine farms she visited. With her camera she captured this in-depth experience of farm life over a period of over 60 years. She knew the world of Alpine farming like no other. 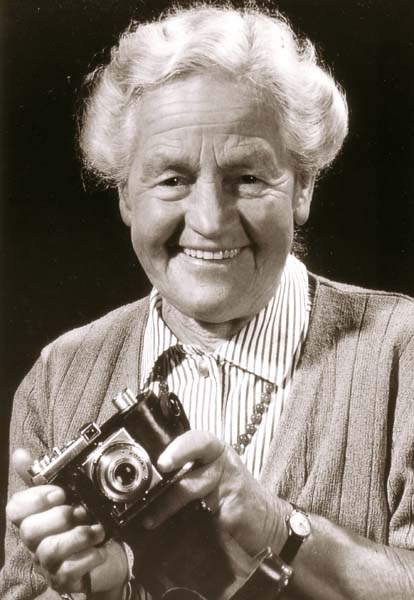 Erika Hubatschek with the Kodak Retina from the thirties, 1997